“It was the best of times, it was the worst of time, it was the age of wisdom, it was the age of foolishness” starts A Tale of Two Cities – the famous Charles Dickens historical novel set in the time of the French Revolution. And, whilst we might not be quite at the revolution stage in the UK, these words would seem a fair summary of how we find ourselves with just six months to go until Brexit becomes a reality.

In my last article I wrote of how there was lots of posturing within government but no real progress on negotiations with the EU. Here we are, six months later, and the uncertainty remains. Worryingly, virtually nothing has changed. In March I talked about growing uncertainty in agriculture, Brexit and the wider economy, and this remains the case. If anything, the situation is getting more unstable as we move closer to March 2019, without any apparent idea of the shape of Brexit and there remains just a short window of time for a deal to be done if we are to avoid the cliff edge of a no deal departure. Of course, what compounds this is that our own politicians can’t agree. UK politics is as fractured as ever and the result is that not one political party seems capable of finding a solution that would get sufficient support to be voted through parliament, let alone be agreed by the EU negotiators…. 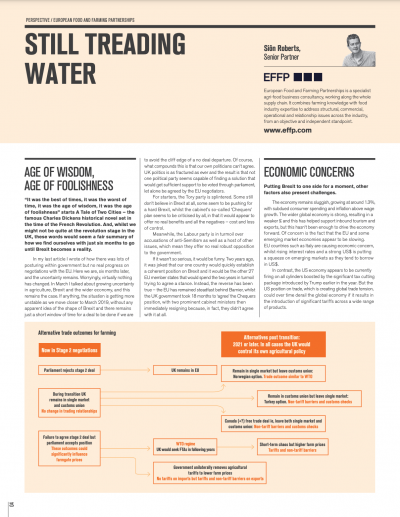 We use cookies on our website to give you the most relevant experience by remembering your preferences and repeat visits. By clicking “Accept All”, you consent to the use of ALL the cookies. However, you may visit “Cookie Settings” to provide a controlled consent.
Accept AllRead MoreCookie Settings
Manage consent

This website uses cookies to improve your experience while you navigate through the website. Out of these, the cookies that are categorized as necessary are stored on your browser as they are essential for the working of basic functionalities of the website. We also use third-party cookies that help us analyze and understand how you use this website. These cookies will be stored in your browser only with your consent. You also have the option to opt-out of these cookies. But opting out of some of these cookies may affect your browsing experience.
Necessary Always Enabled
Necessary cookies are absolutely essential for the website to function properly. These cookies ensure basic functionalities and security features of the website, anonymously.
Functional
Functional cookies help to perform certain functionalities like sharing the content of the website on social media platforms, collect feedbacks, and other third-party features.
Performance
Performance cookies are used to understand and analyze the key performance indexes of the website which helps in delivering a better user experience for the visitors.
Analytics
Analytical cookies are used to understand how visitors interact with the website. These cookies help provide information on metrics the number of visitors, bounce rate, traffic source, etc.
Advertisement
Advertisement cookies are used to provide visitors with relevant ads and marketing campaigns. These cookies track visitors across websites and collect information to provide customized ads.
Others
Other uncategorized cookies are those that are being analyzed and have not been classified into a category as yet.
SAVE & ACCEPT
Powered by